Three weeks have flown by.

In a haze of mostly office stuff, see the office blog for that.
The pups are doing very well although we’ve had a few setbacks, mainly a tummy bug.  Dido was being picky with her food and I thought it was just the dish problem but somewhere along the line she’d picked up a bug which eventually resulted in a very messy yard and cage and of course shortly after Hester got it too.  They were really quite poorly, very flat and listless, not interested in anything at all really.  An overnight 18 hour starve (they’re not really big enough to do a full 24hrs) and small portions seemed to so the trick.  They both recovered quickly but a couple of days later Dido had a relapse with explosive results! This time round I thought vet assistance was required, if only to ease my mind, there was some rebounding in her guts which were loudly gurgling and a small area of tenderness.  One tube of puppy ‘calf paste’ and small bland meals every couple of hours for the next few days was the prescription.  Dido was really good about going into the vets on her own, Hebe had come with us in the car but was left on guard.  Small complication - the aga was out (that’s another story) so only a microwave for cooking.  I picked up some cooked turkey and swiftly learnt to cook rice in the microwave. After 48 hours she was much improved and I started adding back in the Euk.  A week later she’s so much better that she eats a load of cut grass which ferments in her tum resulting in all of her tea making a reappearance in spectacular fashion over the course of a few hours until the brown gungy, smelly mess appears and then she’s looking for food again - brown bread and honey for an extra supper and by morning she’s thin but ravenous!  Even more so when I only let her have half her breakfast - well, that’s what happens when you eat things you shouldn’t.
So we lost a week’s worth of training but I don’t think it’s had a major impact, in fact being stuck inside we’ve been working on sit, which is coming on really well.  They will both sit on command both verbal and hand signal with words and hand signal without words; Dido will sit at a distance of 2-3 metres (assuming no distractions) but Hester still comes towards me before her bottom makes contact with the ground.  Hester is a more natural retriever and gift bringer and today we’ve started on wait before sending out. Dido is more inclined to take the retrieve and dash off with it, and on retrieve recall (different command from plain recall) will often drop it mid way back, in expectation of reward I think even though she’s never been given one after a retrieve - that brain of hers is sometimes too smart for her own good, you can see the problem going in, rattling around and off she goes with her chosen solution which usually involves feet or teeth!

The upset tums made me readdress the feeding regime.  The first brainwave was adding a splash of hot water to their dry kibble which is very sticky and requires lots of trips to the water dish.  Since starting to add the water they’re both noses straight in and gone in one sitting.  The second lightbulb moment was feeding times, we’ve always dropped lunch first giving them breakfast, tea and supper; however this wasn’t working this time round, our (or more precisely my) time schedule is different, there wasn’t long enough between tea and supper so supper was ending up at somewhere between 10 and 11 and I was having to wake them up for it and then keep them awake long enough to empty their tanks before bed; all in all not a good arrangement.  So lunch went back into the routine and supper has gone without being missed at all.

Poor Hester still keeps getting bad experiences when she’s out and about but now she gets over them faster so we’re building up some confidence there.  Dido has had a few scary moments and although she doesn’t quake like Hester it takes longer to settle back down and carry on in a normal fashion; Dido is also much more bouncy and wants to bounce on the world which means that sometimes our progress is more a series of kangaroo jumps than a sedate walk.  Hester trots along happily beside me being nudged back into place - until something scary happens!
They’re both coming along really well on their own; however, yesterday we had our inaugural two puppy outing and as an exercise in heel work it was not a success!  I had to do it much earlier than I had planned because we’ve been invited to a puppy party at the vets next weekend and I need to be sure I can manage both of them; apparently the answer is yes, but they’re not exactly at heel!  Oh well, it will come in time.
This week we’re going to start walks with Hebe, weather permitting taking it in turns to go for the morning paper which will reduce my walk schedule by one but also cut the length of Hebe’s morning outing  - we’ll make it up with playtime after dark.  At least that’s the plan but we have the builders starting work on Monday in the sitting room and Maia is at the vets on Tuesday for her second cartophen injection so things will remain fluid.

Hebe has been a real revelation, she’s a perfect Big Sis, stepping in to break up raucous playtime, playing gently with tug toys, sharing chewy toys but sometimes keeping one for herself, firmly but gently.  Watching at teatime (the one shared mealtime) and darting in to hoover up any spilt bits (she doesn’t know I’ve cut her ration to account for her ‘extras’!).  Although sometime she does take advantage because apparently puppies make perfect pillows during a hard day at work. 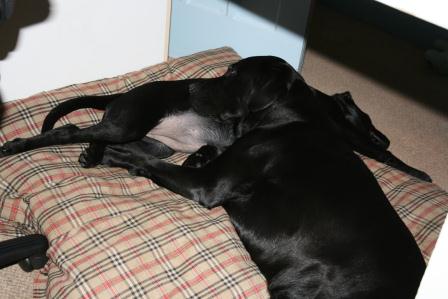 The pups are also forming their own Job Descriptions, they taken over shredding duties and will even sometimes read the papers for us.
They are so different.

Chunky Monkey Dido has grown into a long legged, square headed girl; she has a week of growing up until she’s a real skinny-ma-linky-long-legs and then a week of growing out until she’s puppy shaped once again.  Hester seems to grown all ways round although sometimes she’s a real plumpkin, her face is more rounded than Dido’s and she has much bigger eyes.  Dido is curious about everything and wants to help - no matter what you’re doing - she also sleeps less and really quite vocal, grunting to be let out, a different grunt for a cuddle (which are few and far between she doesn’t like being smothered) and whingy series of grunting when she’s desperate to stay awake and play a little longer but is dead on her paws.


Hester in contrast loves to be cuddled and will tuck her head into your shoulder folding her legs in and doing a very good impression of a teddy bear, she too fights sleep but not as much as Dido, she needs more reassurance but contrarily is often the instigator at playtime and the one who has to be forcibly stopped for her own good. Hester watches what’s going on but only if you’re on the floor will she come to investigate  - usually with a gift in mouth; she has only two speed flat out top speed ahead and flat out asleep with very little inbetween.

So as Mr Robson says on GQT it’s onward and upward.