The further adventures of Finnegan the Foolish Hooligan

Shortly after his trip to see his favourite Vet the top from a milk bottle went missing, we had a suspicion that Finnegan had stolen it, as he's the only canine big enough to reach where it had been left; but the window of opportunity was small and it didn't really follow his usual modus operandi,  of taking his booty to munch into little bits on his dragon's den.  We watched him like a hawk for a few days - over a week really - and he was absolutely fine and no sign of the top.  So we began to think it must have been thrown away and we didn't realise, or it's down the back of cupboard or similar equally inconspicuous.
Then last week Hebe picked up a stomach bug from somewhere, the pungent aromas in the office on Friday afternoon necessitated having all the windows open even though it was raining heavens hard. Poor small black was quite out of sorts with herself, not helped by her Beans shouting at the men on the box chasing after the oval ball.  Being a labrador it didn't put her off her food or heading out for walks. But on Saturday night she threw up pretty much everything she'd eaten that day and the dog house was awash in the morning from her at one end and Finnegan at the other. No breakfast on Sunday for either and they were both feeling sorry for themselves with hot noses and warm ears and then by tea time with still no sign of food on the horizon they started grumbling about empty tummies. Hebe was fine on Monday if a little flat because of the shortage of food, brown bread and honey for breakfast cheered her up no end but Finnegan exploded all over the yard - nice! So he was on bread and honey and half rations, all was fine by Tuesday, slightly dodgy tum from hound but getting better - the pro-biotics and slippery elm left over from last year's adventures were working a treat.

And then...
Thursday night he threw up again and kindly left this: 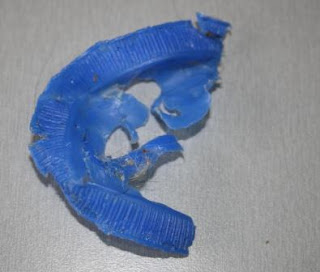 It's pretty much all there.  Such cheers and smiles over a small piece of blue plastic have probably not been seen before! And hope will not be again.

Foolish Hound.
Note to self, he can reach much further and is more sneaky than you think.

Footnote, Maia's got the bug now and is making the pungent smells, lovely...